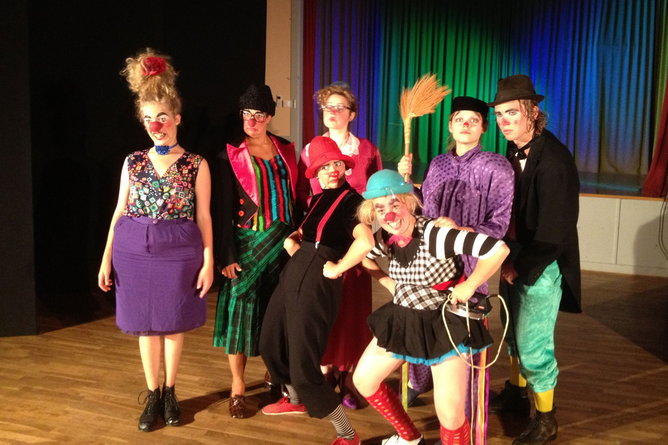 Ciboulette is a Clown Troupe, that I founded with 4 fellow students from my first year at Dell’Arte in 2010. We are an international all women Clown Throupe with Kajsa Jonasson, Emilie Höijer and Marie-Louise Höög from Sweden, Camille Hadjadj from France and myself from Denmark.

From 2011-2015 we arranged a one-day Clown Theater Festival in the village Falerum in Sweden (Ôstergötland). We were housed in the Community House in the village, which is on the top of a cliff, from where the name of the festival came ”Klintkalaset” (The Feast on the Cliff).

The concept we have had these years has been the following: We meet and work over the course of six days and create a 30-40 minute clown performance, which is shown for an audience at the end of the week, together with one or two other guest shows. The Performance is based upon a fairy tale by Hans Christian Andersen, and in that way it becomes the clowns who are making a theater performance and they play all the characters from the fairytale.

In 2016 we were a part of the H. C. Andersen Festival in Odense in Denmark, where we performed ”The Swineherd”, and our hope is to be part of this festival again in 2018.