The Feud is a collaboration between me and Ruxy Cantir from Moldova (Dell’Arte MFA grad 2013). This performance tells the story of a feud between two different women: The famous, french feminist, Simone de Beauvoir and the less famous belgian ballet dancer, Cleo de Merode.

It is said that Cleo de Merode had an affair with the Belgian King Leopold, and that she was mostly known for her beauty, than her skills as a dancer. Cleo lived in the time of ”La Belle Epoque”, where beauty and melancoli was a preferred feature of the female sex. In her old age, Cleo was a perplexed lady, who felt misunderstood and imprisoned by the world around her.

Simone de Beauvoir lived in a time of change and innovation – she re-defined the woman, the female sex and role in society, and she was very progressiv, when it came to exploring her own sexuality. She appeared to be strong and independent, but was also very sensitive, and in a constant search of finding her own true self in the world.

For us the fight between and within these two so very different women personify some essential aspects of what it means to be a woman and a human being in todays society.

We live in a time long after the womens rights movement and equality between all sexes should be a shared value in the world, but still oppression based on conventions exist – and it is not easy to get a chance to try to define who you are on your own.

The Feud will investigate what it means to be a multi dimensional human being and ways in which that can manifests.

The performance will be produced in 2019 and premiered on the festival Copenhagen Stage in 2020, where after we will tour it on different stages in Europe. 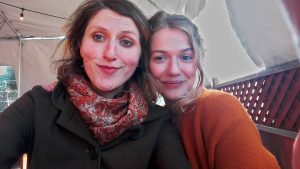